The EU's 'Anti Tax Avoidance Package' takes us beyond BEPS

The EU’s 'Anti Tax Avoidance Package' takes us beyond BEPS…

On 28 January 2016, European Commissioner for Economic and Financial Affairs, Mr. Pierre Moscovici (French Social Democrat), unveiled the EU’s “Anti Tax Avoidance Package”, a key deliverable within the framework of its ambitious “Action Plan for Fair and Efficient Corporate Taxation in the EU”, launched in June 2015. “The days are numbered for companies that avoid paying tax”, according to the very motivated Commissioner Moscovici.

The June 2015 Action Plan for Fair and Efficient Corporate Taxation in the EU “sets out a series of initiatives to tackle tax avoidance, secure sustainable revenues and strengthen the Single Market for businesses”, the press release1 makes it opening bid, and continuous with the statement that “collectively, these measures will significantly improve the corporate tax environment in the EU, making it fairer, more efficient and more growth-friendly”.

The Action Plan essentially is based on the following 5 pillars:

1.  Re-launching the Common Consolidated Corporate Tax Base (CCCTB), in first instance focused on achieving a common tax base, and afterwards consolidation
2.   Ensuring fair taxation where profits are generated, including a focus improvements to the transfer pricing framework, patent boxes and on effective taxation
3.   Creating a better business environment, through cross-border loss offset and improvements to the dispute resolution mechanism
4. Increasing transparency, including the implementation of automatic exchange of tax rulings, screening of a non-cooperative tax jurisdictions list, and further improvement work
5.  Improving EU coordination, through the coordination of Member States’ audits, the reform of the Code of Conduct Group, and the reform of the Platform on Tax Good Governance

Pierre Moscovici, Commissioner for Economic and Financial Affairs, Taxation and Customs, said: “Billions of tax euros are lost every year to tax avoidance – money that could be used for public services like schools and hospitals or to boost jobs and growth. Europeans and businesses that play fair end up paying higher taxes as a result. This is unacceptable and we are acting to tackle it. Today we are taking a major step towards creating a level-playing field for all our businesses, for fair and effective taxation for all Europeans.”3

The ATPA is composed of the following initiatives:

•    Proposal for an Anti-Tax Avoidance Council Directive, which would include legally binding anti avoidance measures;
•    Recommendations on Tax Treaty Issues, including advice on how to revise national tax treaties against abuse;
•    Proposal for a Council Directive implementing the G20/OECD Country by Country Reporting (“CbCR”);
•    Communication on External Strategy, which include measures to promote tax good governance internationally; and
•    Staff Working Document, including further analysis and support for the above initiatives.

Measures against anti-avoidance, as contained in the Proposal for a Council Directive5 include:


Other key elements in the ATAP

In view of the EU Recommendation on tax treaties, where the aim is to close down treaty shopping practices, Member States are advised on how to reinforce their tax treaties against abusive use, in an EU-compliant manner. The basis of the Recommendation lies in the non-applicability of tax treaties where there are no genuine economic activities performed by the company that wishes to use the treaty – i.e. in line with the Principal Purpose Test as described under BEPS.

As regards the Proposal for a Council Directive implementing CbCR, effectively Council Directive 2011/16/EU as regards mandatory exchange of information in the field of taxation, will be amended. More interesting in view of CbCR, however, was that Mr. Moscovici during the press conference reiterated that whether or not CbCR should be made available to the broader public will be decided upon during springtime 2016, but that it was his personal preference to have public CbCR and that it was his conviction that this only is “a matter of time”.

On the External Strategy for Effective Taxation the communication from the European Commission to the European Parliament and the European Council includes a 3-step approach for listing countries that refuse to respect the EU’s Tax Good Governance standards:

1.    The Commission identifies a set of third countries that may need to be screened using a neutral scoreboard of indicators;
2.   The Member States decide which countries in this set should be screened effectively, and a constructive dialogue with those selected countries is initiated;
3.   The Commission recommends, and the Members States decide, which countries should effectively be listed, whereby de-listing can be reached when jointly agreed standards are met.

The ATAP presented on 28 January 2016 introduces a new period of further work in smaller technical working groups at the European Commission and of further discussion with Member State officials. As a result, a number of modifications could be introduced, but it is generally expected as it stands today, where the EC already has made effort to produce rather complete European Council Directive proposals, that the direction is clear and that European Commission will utilize its utmost effort to limit the modifications required to come to an agreement. Upon such agreement is reached in the working groups, the EU Council of Finance Ministers will be invited to approve the final proposals of the European Commission. Ordinarily the working group and negotiation process takes a considerable amount of time, but it appears that the European Commission is pushing hard for coming to an agreement as soon as possible, as indicated in time table below for the full Action Plan. 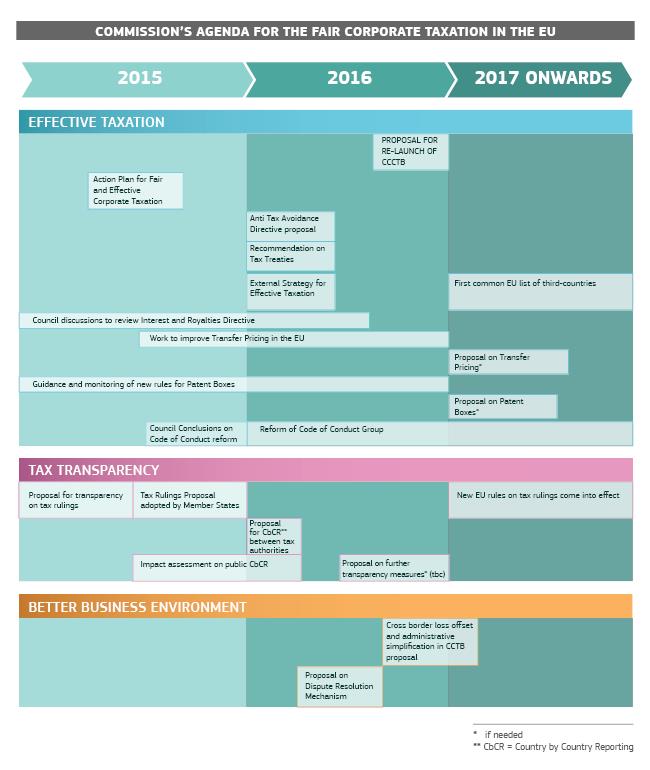 In that perspective it is worthwhile to note, nevertheless, that any measures to be adopted must be agreed unanimously by the 28 Member States in order to become law. However, Mr. Miscovici stated during his press conference that he is very confident that agreement can be reached very soon, since the terrain has been already well prepared by the OECD in view of the BEPS project, and considering that Member States are well aware of the voice of the EU’s citizens and NGOs demanding a fair corporate taxation system.


Our initial comments and take-aways

1.    The ATAP presented goes further than the BEPS recommendations on several points, which is also illustrated in the comparison table produced by the EC self9 (highlights added): 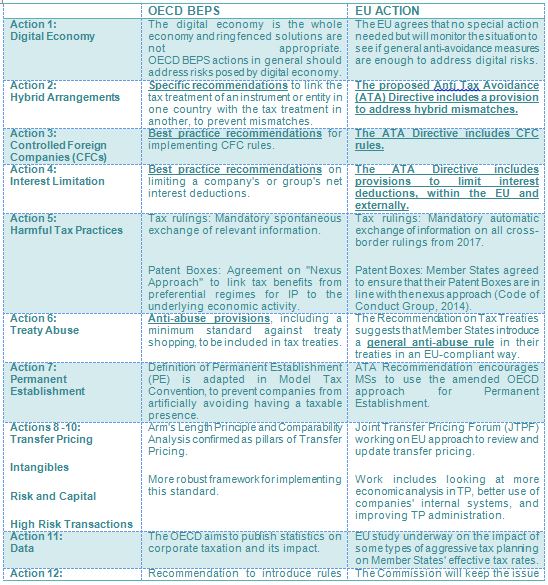 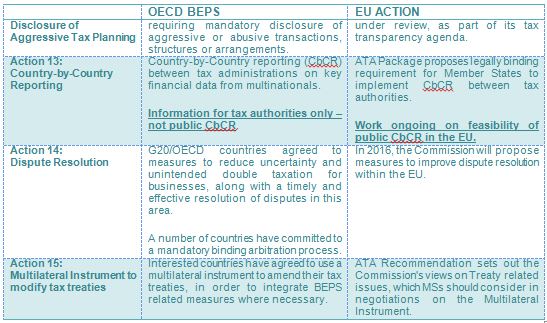 2.    The switch-over rule, furthermore, is a step further in addressing low corporate taxation, merely based on tax differential – irrespective of whether it constitutes genuine business activity that has been subject to a significantly lower tax regime;

3.   There has been no impact analyses performed in view of the attractiveness of the EU as a whole for making global investments.

We advise our taxpayers to closely monitor the developments at the EU level as it is anticipated that the European Commission will relentlessly push towards a quick agreement. It may be also worthwhile to consider assessing already in a preliminary stage what the impact could be on the business on the basis of these proposals, on which further interesting reading can be found via the EC’s website: http://europa.eu/rapid/press-release_IP-16-159_en.htm, and to initiate discussions with local Member States representatives on the basis of such impact assessment so that they can make an informed decision on whether or not to agree.

We will from our side start further detailed technical analyses, and on that basis will further inform our clients and the communities to which we are connected on the reasonable and balanced way forward.

VAT on making cars available to employees: a headache ahead for cross border…

On February 11, 2021, the Luxembourg VAT authorities issued a circular with respect to the treatment applicable to making cars available to employees. The Circular offers…
More

Constitutional Court questions the application of the cayman tax to trusts

Previously, in its judgment of 11 March 2020 (A.R. no. 2018/4033/A unpublished)1, the Brussels court of first instance approved an agreement between the Belgium-resident founder…
More